What I Missed While Multitasking During the Oscars…

Last night, about an hour and a half into the Oscars, I received a text from my boyfriend asking how it was possible that I wasn’t all over Twitter and Facebook voicing my critiques and commentary of just what the hell was happening on the stage of the Academy Awards?! To be honest, I was busy transferring my blog from Blogger to WordPress and was fairly distracted throughout the entire show.

I did, however, catch the “We Saw Your Boobs” (a song that while perhaps funny on the surface, actually in essence objectified these women and reduced their incredible acting performances to nothing more than reminding us that we’ve seen all of them naked); Seth MacFarlane assuring us that he wasn’t a member of the Gay Men’s Chorus (homophobia at its finest); and Star Trek’s Captain Kirk’s (William Shatner) visit from the future to inform MacFarlane of his missteps and why he would inevitably be dubbed the “worst Oscar host ever” (while I do not think he was the worst ever, I do fault him for taking advantage of the ‘room’ he was given by society and the media because of the envelope-pushing that happens in MacFarlane’s creations like Family Guy). Spencer Kornhaber, a senior associate editor at The Atlantic, wrote an excellent piece today entitled, ‘The Banality of Seth MacFarlane’s Sexism and Racism at the Oscars.” Definitely worth the read.

When host Seth MacFarlane opened stating that his goal for the night was to make Tommy Lee Jones laugh, I thought we might be in for a treat with this guy as the host, but the content and underlying meanings and messages quickly took a turn for the type of unpleasant and enraging shows we had to endure when Ricky Gervais hosted a few years ago.

More than anything, this post is meant to serve as a recap of many of the conversations that happened today post-Oscars (for those of you who may have also been doing too many things at the same time to catch all that occurred last night). 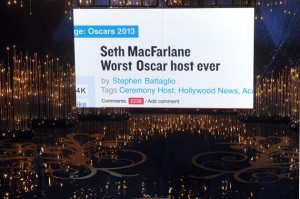 This vid-list from BuzzFeed provides a pretty comprehensive grouping of the most substantially hypersexualized, objectifying, and stereotypical comments made by host Seth MacFarlane. The conclusion of Kornhaber’s article from The Atlantic, mentioned above, aptly synthesizes what is at the root of this event (and of the larger issue):

It shouldn’t be hard to come up with a sensible position on this. Everything, including punchlines about the Jews cutting non-Jews out of Hollywood, snickers about women faking the flu to lose weight, and cracks that there’s no need to try to understand what Salma Hayek’s saying because she’s so hot, is “OK.” It’s a free country, etc. But that doesn’t mean those jokes aren’t hurtful, obvious, or dumb. It doesn’t mean they don’t make the world a worse place. Humor, after all, can be an incredible weapon for social progress, but it can also be regressive: The more we pass off old stereotypes, rooted in hate, as normal—as MacFarlane did again and again last night—the longer those stereotypes, and their ability to harm people, will be in place. If only Captain Kirk had told us whether we’ll have moved past this nonsense by the 23rd century.

Additionally, one of the most troubling, upsetting, and disappointing moments during the Oscars did not happen on the stage, and it didn’t come out of MacFarlane’s mouth. It was a tweet from The Onion, a satirical weekly publication that spins news stories in (usually) bitingly funny ways (that can greatly help us all to cope with the oftentimes ridiculous headlines and news stories that come out of this crazy world that we live in). Last night, however, one staff tweeter took it too far and made an incredibly distasteful comment about the youngest Oscar-nominee of all time (and incredibly talented actress), Quvenzhané Wallis: 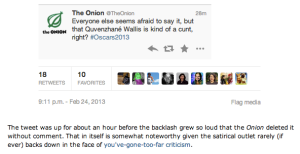 While the Onion has apologized, it’s not enough. A response like, “It’s OK, it’s The Onion,” overlooks the underlying issues of objectification, victimization, and ethics surrounding “othering” those who barely have the agency to speak for themselves (this girl is nine-years-old).

Moya B., a writer from The Crunk Feminist Collective, responded with a Love Letter to Quvenzhané Wallis, and it is nothing short of wonderful.

I was disappointed with myself for not paying closer attention last night…it’s only recently that I’ve realized how much of a unique phenomenon awards shows are in terms of visibility, expectations, and content; what we–society, consumers, the entertainment and media industries–have ‘made’ award shows to be, what we have caused them to mean. They create a particular type of space and provide a particular kind of platform that, of course, celebrates talents in certain entertainment areas (music, film, theater, etc.), but also provides viewers–largely mainstream consumers of popular culture and materialism–with a few voyeuristic hours to experience the manufactured glitz and glamour in high concentrations of “celebrity.”

Thinking about the notion of celebrity, I think it’s important to recognize what these awards shows mean, what they represent, and what we take away from them each time:

Daniel Boorstin (1961), an American historian and author of The Image: A Guide to Pseudo Events in America, argues that celebrities are “human pseudo-events” created to attract hype and media attention [just] for the sake of it (Boorstin, 1961). Boorstin defines the celebrity as “…a person who is known for his/her well-knownness…He/she is neither good nor bad, great nor petty…He/she has been fabricated on purpose to satisfy our exaggerated expectations of human greatness” (p.58). Gabler (1994) continues:

…movie stars were more than embodiments of fame. They were also living, breathing tropes who demonstrated that what was true for one entertainment medium (film) was equally true for another (life)—namely, that entertainment needed identifiable and magnetic personalities to maximize the audience response to sensation. Movies had stars. Life had celebrities (p.146).

In closing, this is not the first and definitely not the last time that these kinds of jokes will be delivered at an awards show, but we can watch with more critical eyes, talk to others, and the most powerful and important takeaway is that we, living in this insane age of technology, have immediate and direct access to the sources creating and distributing all of this problematic and troubling content. Tweet them, write on their Facebook walls, use Google to find the email of the senior editors, the CEOs, and presidents of companies. They shouldn’t be hard to find. Let’s use the same tools and digital platforms that allow stereotypical and archaic images and messages to be perpetuated to TALK BACK to the individuals and groups who are not thinking with their heads or hearts, who need a media literacy education themselves. And finally…

…perhaps instead of this having this reaction about the kind of “jokes” that we hear all too often from hosts of awards shows:

And maybe next time, put the computer down, fold the laundry later, PAY ATTENTION to these shows, AND TWEET ABOUT THEM, using the event’s own hashtag (e.g. #Oscars2013) so that our critical commentary shows up in the same feed as all of the other complacent and wrongly-directed reactions….

← I hate to break it to you, but…Black History Month is just not cutting it…
What Still Remains Left Unsaid about “Being White in Philly”: An Open Letter to Robert Huber →

2 thoughts on “What I Missed While Multitasking During the Oscars…”