Visual & Written Story 4: Where I Am Now

Where I Am Now 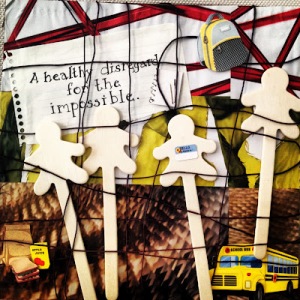 Yesterday I completed my first semester as a teaching assistant. While my only major responsibility as the TA was responding to the students’ weekly reading responses, there were 25 students enrolled in the course this semester (as compared to 15 last semester, when I was a student in the class) and the added workload was the equivalent of taking a fifth class. It was a lot. That said, the course is about how to both teach “diverse” student populations, as well as about how to bring issues of “diversity” (racial, ethnic, cultural, gendered, socioeconomic, linguistic, etc.) into the classroom. I took the course last semester, although it’s out of my department and although I do not intend to become a classroom teacher, because I do anticipate working in education and specifically with teachers on how to create and practice culturally relevant and socially just pedagogy, how to talk about difficult sociocultural issues, and how to incorporate mass media and popular culture texts into their curriculum to better engage and prepare students to become 21st century learners and citizens.

I learned a lot as a student in the class last semester—the readings were excellent and the class discussions were productive—but the real source of learning for me was through my self-appointed role as ‘participant observer,’ as I observed many of my classmates critically reading and analyzing texts and topics about race, diversity, social class, gender, for the first time. While my initial reactions were filled with frustration and fury at the naïve and ignorant comments being made by my [predominantly white] peers in the first few classes—using the terms “diversity” and “race” interchangeably, identifying as “colorblind,” and having no idea about how their positionalities (in regards to intersections of race, class and gender) have affected who they are and who they will be as educators—I soon realized that this group was a fairly accurate representation of the groups of teachers I hope to work with someday. By the third class I’d decided to think of my time in subsequent sessions as ‘professional development’ as much as an academic class. Using this lens, I followed the trajectories of the other students in the class over the course of the semester—watched as their readings of the texts got a little deeper, their criticality of themselves, youth, education, and socially constructed concepts got a little stronger. And, at the end of the semester I inquired about serving as the course’s teaching assistant this semester.

The spring semester got off to a bit of a rough start, mostly due to the professor’s scheduling conflicts which made him unable to physically be in class, and when we all finally resumed in the fourth week of the semester, it was clear that there had not been a safe space or a trusting relationship established between the professor (and me by default) and the students. I was quite aware of what was going on, but as a first time TA, I was unsure of how to go about trying to remedy the situation. I finally decided to take a proactive approach and attempt to initiate the creation of a safe space through leading an ice breaker activity the following week (ironically the week we were reading about and discussing ‘whiteness’ and ‘white privilege’, a topic I am passionate about and which I personally feel needs more attention in the course, so I was determined to make this the week that changed the uncomfortable classroom atmosphere). The next Monday I facilitated an activity on social class and privilege (“stand up if the following statements apply to you, sit down if they do not”). Although participation was not mandatory everyone stood up in front of their chairs when notified we were about to begin. The room was silent except for my voice reading the questions, the professor and I also participated (which I think said a lot), and in less than two minute’s time, the 27 people in our classroom had shared more without speaking a word than they had in four weeks of class. It was powerful. So incredibly powerful. I’m not exaggerating when I say that by the end of the meeting the mood, comfort level, and climate had dramatically changed; it felt like a different class.

Throughout the semester I have spent hours each week taking the time to provide thoughtful feedback to the reading responses of 25 students—asking them questions, pushing back on notions and attitudes that I feel need to be more carefully analyzed and deconstructed; always being sure to clarify when I was giving my personal opinion with “I think…” and challenging statements with “Perhaps…”.  I received a few emails from students throughout the semester thanking me for my feedback and suggestions on how to deal with situations, bring up difficult conversations, or think about themselves and their students more critically. And as the weeks went on, it was clear that the classroom environment had greatly improved—conversations were getting deeper, more people were participating in class, and many of the students were really taking the time to honestly and critically reflect and share personal stories and experiences in their weekly reading responses. I felt privileged to be given access to all of this incredible information and I let students know that, thanking them for sharing and for taking the time to use the texts to synthesize what they had experienced in their own lives.

Cut to last night, students shared their final group projects, something they’ve been working on since late February, and they were amazing. All of the unit plans they’d developed had culturally sensitive and relevant content and activities, and the students had critically engaged the assignment with the hopes to actually be able to use the lessons developed by each group in their own future classrooms. At the end of class, the professor left and I remained to administer the student course evaluations. On their way out, two students handed me their papers and said they gave me “shout outs” on their evaluations, two more students approached to sincerely thank me for the obvious time and effort that I had put into replying to their reading responses every week, and they wanted me to know how helpful my feedback had been for them as student teachers this semester and as real teachers next year. A few other students wished me luck on finals, a few smiled and left silently, but I was on top of the world. All of the long hours, frustrations about not getting all of the work done for my other classes because of the time I’d spent on the work for this class, questioning why I was giving paragraphs of feedback…it was all worth it. Not only that, these few comments reinvigorated and reassured me that this is what I want to do with my life—although I’m not exactly sure about what the work will look like, I have no doubt that this kind of work needs to be a part of who I am and what I do for the rest of my life.

I was not at all planning on writing about this for my fourth story, but I think I really needed to reflect and document what proved to be an incredible experience this semester right after it ended. And I needed to do it now, and not a few weeks ago because in the thick of it I wasn’t always thinking about how useful and beneficial this role was for me. In writing stories about “educational” experiences and thinking about “storying” our educational lives this semester, all I can say is that I don’t think that I could have written any other story for my last piece because this to date has probably been one of the most personally significant educational stories that I can tell and that I know will stay with me and continue to influence my work for a long time.